The Gowanus Rezoning: Why it’s problematic, and how we can fix our broken land use process

One of the most important roles the City Council plays is to oversee land use. Yet the real estate industry still holds most of the power. As a result, many working people are ignored and the rich and powerful still get to carve up and decide what kind of city New York will be. The 39th District is not immune to this problem. It has a diverse community who will be impacted by these planning decisions, and whose voices need to be heard.

We must also not lose sight of how we can fix the larger problem — that working-class communities don’t have a say in what happens to their neighborhoods, their homes, and their livelihoods.

We are living through a housing crisis, which is turning into an eviction crisis during a pandemic. And yet, the de Blasio administration is seeking to rezone Gowanus as one of its last acts, without providing for the real needs of the working people living there.

The NYC Department of City Planning (DCP) wants to make Gowanus a home for the wealthy. In 2018, they released a framework for a proposed rezoning of 80 blocks of the neighborhood and the Fourth Avenue corridor. 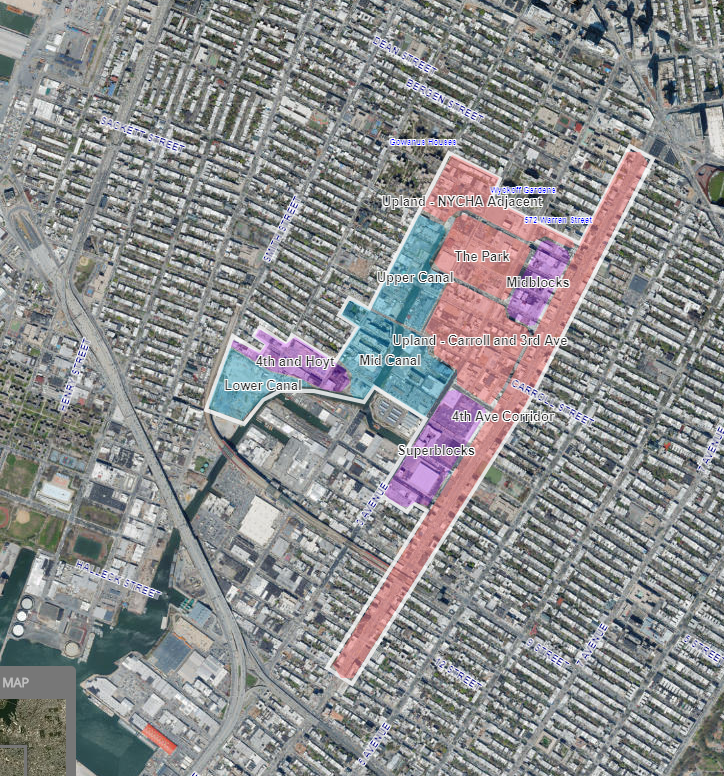 DCP says they based this framework on a community process spearheaded by City Councilmember Brad Lander, which included some laudable goals, such as creating new, permanently affordable housing for those with low incomes, creating new job opportunities in the industrial sector, and creating a walkable neighborhood with access to the waterfront. Those things may sound good, but the plan only creates a fraction of the affordable housing we need, and much of it won’t truly be affordable. Moreover, climate change is shaping the landscape of our communities, and the plan fails to reckon with this.

We deserve affordable housing and improvements to our neighborhood. BUT WE CAN DO BETTER.

Housing is a human right, and Mandatory Inclusionary Housing (MIH), as used in the Gowanus Rezoning Plan, isn’t enough. The City says that on privately owned land, this rezoning will create 7,200 new units of housing (the rest will be on public land). But only 2,000 of these 7,200 units will be “affordable,” as determined by the MIH law and federal affordability standards that don’t reflect the needs on the ground in New York. It’s likely that the units could cost anywhere from $854 to $2,979 a month for a two-bedroom apartment. We must ask ourselves, can the working class afford this housing? (The answer is, quite simply, no. A minimum-wage-earning parent of two renting the least expensive 2-bedroom would still struggle to cover groceries, electricity, gas, medical bills, child care, and other basic needs for their family, and definitely wouldn’t be able to afford the apartment at the higher end. This is unacceptable.)

We need to reform MIH to ensure that it creates real affordable housing for New Yorkers with the most need. We need to work with the federal government to create quality publicly owned housing, and not just on public land.

The alternative to the Gowanus Rezoning is not to do nothing. We must build housing. But the argument that building luxury housing at these rates brings down housing prices for below-market-rate housing hasn’t worked. The Fourth Avenue corridor is already facing displacement as a result of the previous zoning and resulting influx of luxury housing.

Update (November 2020): DCP recently announced more detailed plans for the Gowanus Green site, also known as “Public Place”. How we use our public land is crucial to planning for an equitable future. Public land is a public resource and therefore we must maximize the public benefit that comes from any development on it. This proposal makes some steps in the right direction, but still has room for improvement.

The developer has proposed 950 units of income-restricted housing. 50% of those will be made available to people making less than 50% of the Area Median Income (AMI), which is just over $50,000 for a family of three. The proposed low-income senior housing (115 units) and supportive housing (73 units) are examples of good use of public land, because these building types serve truly low-incomes and address our homelessness crisis by pulling seniors and others in need directly from the shelter system.

However, according to DCP, about 40% of the project’s total units will be made available to those making 81-120% AMI, or approximately $82,000 to $123,000 for a family of three. As the rental market slows in Brooklyn, we should not be using our public subsidy dollars and public land to provide “affordable housing” at these incomes.

Additionally, neighbors have expressed skepticism that the planned environmental cleanup of this extremely toxic site will be adequate to ensure that those who live there will be safe. Putting income-restricted housing on a toxic site is something this country has done over and over again, exacerbating health issues in countless low-income communities of color. We need real guarantees that this site will be remediated to the highest possible standards before any development occurs.

The climate crisis will devastate New York City unless we build policies that fight against it. Much of the plan’s proposed development is in a flood zone. During Hurricane Sandy, 51 square miles of New York City flooded. In District 39, we saw floods and power outages for the low elevation parts of the district in this potential rezoning. We need assurances that our homes will be safe from flooding.

As we recover from the impacts of COVID-19, we need to ensure that the people in District 39 have access to good-quality, safe jobs that allow them to provide for themselves and their families.

We know that manufacturing jobs provide good pay with low barriers to entry and are particularly important to communities of color. The City’s analysis says this plan will cause a loss of approximately 164,000 square feet of warehouse and other industrial space. On the Williamsburg waterfront in 2005, the zoning took away our manufacturing areas, and today, almost no manufacturing jobs remain. We cannot afford to make the same mistake again.

Our community needs more open green space, and crucially, our NYCHA buildings desperately need upgrades. We have been living next to a Superfund site for too long, and need to ensure the toxic environmental legacy of the canal is addressed.

But this rezoning plan proposes that remediation of sites adjacent to the canal be tied to redevelopment. And the new park and public housing improvements (beyond the $4 million for the community center) are tied to the plan’s approval. We shouldn’t line the pockets of big developers by letting them build luxury housing, just so that we can get the City to invest in our neighbors and our future.

It’s clear that our land use process is broken, and that the Gowanus Rezoning plan will not address our community’s needs. What can we do?

Plan Starting With Our Values

I stand with the New York City Democratic Socialists of America and their vision for future planning, outlined during the successful fight against the Industry City rezoning.

Our planning process must reflect our values and be focused on protecting the most vulnerable populations in our city, not helping big developers get rich. This includes:

When I’m in the City Council, I intend to push for a radical Charter Revision Commission to fix land use. (Stick with me here!) The City Council, with the leadership of the Speaker, can push for this process, in which a Commission makes suggestions for changes to the Charter, which is essentially the City’s Constitution. By revising the City Charter, we can empower communities and make sure that no decisions are made about us without us. The Commission’s recommendations are then voted on by the people. As we’ve seen, ballot initiatives win, and we can build a movement of support to ensure it.

Through this process, we can:

that balances citywide needs with neighborhood priorities. Communities need more power in decision-making. But already some wealthy, white neighborhoods use this power to block the resources working-class people need, like affordable housing and homeless shelters.

Because of this, the City rezones low-income communities of color and removes shelter residents from the Upper West Side. A comprehensive planning framework will outline growth targets and anti-displacement strategies, analyze neighborhood needs, and include necessary siting of public facilities, all while leaving the implementation strategy to a community process. This can mean community and worker-led planning that actually gets implemented, using inclusive, democratic processes that go beyond participatory budgeting to establish neighborhood priorities.

Term limits are a good start, but they don’t go far enough to ensure that the boards actually reflect the communities they are meant to represent. Having them be elected would address this and increase the accountability in their decision-making. They also need technical assistance, which is why we should look to local advocacy groups and a new Office of Community Planning for guidance and expertise. New York’s residents and workers are the best experts to guide how the City should plan with them, not for them.

that would provide technical assistance to communities. The Department of City Planning is supposed to do this, but frankly, we’ve seen them work against communities more often than they work with them. This Office must be independent and tasked with helping (reformed) community boards, CBOs, and other groups create as they implement their planning visions.

These ideas aren’t new. If you want to read more about them, check out these reports from RPA, CUFFH, and the Pratt Center for Community Development. The experts and the folks on the ground know these strategies work. With organizing and collective action, we can work together to ensure our land use process works for the people, not against them.